Sweet flowers alone can say what passion fears revealing
Thomas Hood poem, The Language of Flowers
Tussie Mussie
Express yourself with the Language of flowers.

As it is written……while in 1718 Turkey, a certain Lady Mary Wortley Montagu filled her letters home with fascinating tales of an ancient, Turkish Selam language; a system attaching verses to objects for communicating. The tale quickly spread of the speaking objects & flowers, and upon her death her published letters soon became the rage in all of Europe.

Poetic booklets & lists were furiously written, as the idea of conveying secret messages delighted the prudent societies of the era. This was not taken lightly; each plant or flower would acquire their meanings after much careful thought to their character, personality, history, folklore, position and country of origin. In addition, symbolic phrases were included such as a time for “a secret tryst”, or a detail of an illness.

By the 19th century the prose had reached England. instantly gaining 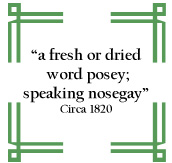 Notoriety; the language of flowers was born and immortalized. The young lords & ladies of the day contacted florists with detailed requests for particular flowers. While others scoured gardens searching for just the right blooms to convey their secret message. In the Winter months they were crafted of precious bits of dried & pressed leaves & flowers. Elaborate flower “tussie” holders were crafted of precious metals and stones; many with a finger ring and chain attached to keep them near when dancing and socializing.

Today, there are new meanings being added still, with the many new hybrids of flowers and plants becoming available. However, the original lists filled with wit and prose are the basis still, and as appropriate today as they were then. Have fun and enjoy!

~Choose your occasion from my so far,  Tussie Mussie meanings,  below in shopping,  or email us your “secret‟ message for a
custom Tussie Mussie

~Ribbon colors are significant chosen
~A descriptive ,Victorian, calling card accompanies each with the message 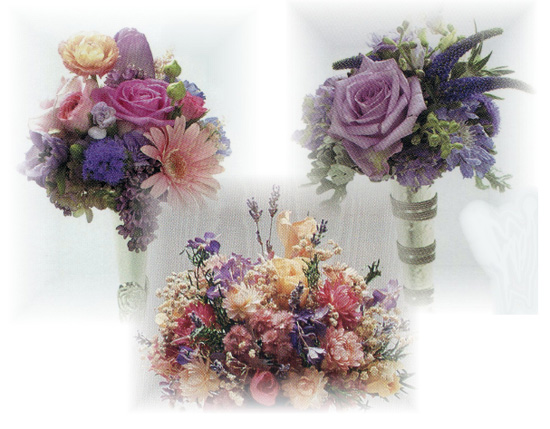