Every January the Sundance Film Festival is held in Park City, Utah.  In fact, the photo of myself and ‘Hoot’ the owl on the About Us  page was taken there.  It is a melting pot of the newest and brightest short films, documentaries, and motion pictures.  A perfect setting for freethinking, nature,  and the arts.  Utah itself is awe inspiring; a treasure of national parks and wildlands.  Three environmental films up for competition this year to watch for:

Wasteland-a documentary that chronicles a photographer to the world’s largest landfill and the pickers who sift through it; recycling their lives from society’s garbage.   Sounds like a world away from our own kitchen trash bin-lest not we forget that away is somewhere.

Tungijug-a though provoking story on the annual seal hunt .  The Inuit depend on them for food and the rest of the world for cheap fur coats.

Gasland-A relevant film to our local area regarding the push for the natural gas drilling process of ‘fracking’.  A powerful look into the environmental issues involved here in our own Sullivan County, and across the nation.   A lucrative offer to many rural landowners, seems a death sentence to the environment.

This is a fitting month to highlight one of the benefit arrangements in our online shopping section-the EcoShop; under Flowers For A Cause.   These arrangements are specifically designed to reflect the charity foundation they represent, with 20% donated.  Sundance is many things beside the festival; one being the Sundance Preserve.  An environmental foundation promoting preservation of our wildlands.  I have a design which I named the 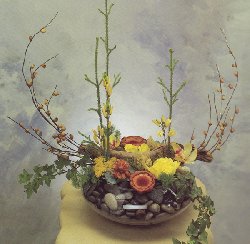 In Memory Of Decoration Day