In Memory Of Decoration Day

﻿**I have updated and re-posting my popular article from 2017 as there are so many changes with the current pandemic. Now there is time to do what the day was created for and I hope to encourage you to visit those passed on that you may not have in a long while, if ever; and among other things. With no parades, picnics, and vacations I hope you will acknowledge those gone with quiet visiting and contemplation of their memory. Remember…no one is ever gone if they’re not forgotten. Lynn 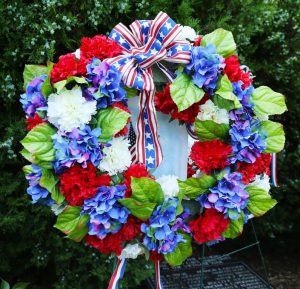 There are many things that ruffle me, and all of our patriot holidays from Memorial Day, Independence Day, and Veterans Day, to Pearl Harbor Day are one that does and honestly, bewilders me.

Decoration Day renamed Memorial Day was started in 1865 following the Civil War.  It continued on with the onset of our World Wars to eventually recall all our fallen soldiers.  All businesses were closed to allow for attendance to memorial services, and ‘decorating’ battle sites and soldiers graves.   Concerns today seem for the perfect pie recipe and best hotel view, acting as though it was created for us, but it was created for them.

I know everyone is grateful for those brave hearts that fought (and still fight) for us and our freedoms; yet celebration is now for shopping, parades, and barbecues rather than these war heroes, veterans, and our own lost relatives.  All this celebrating using  foreign grown flowers, imported décor, and Chinese made American flags

Of all the American flags we so proudly wave and display every year, $5 million dollars worth of these flags are imported, with 97% from China.  At a local store, I recently witnessed a man so incised as to their flags all from China that the manager escorted him out.  Actually, he gladly left-without a flag I might add.  I was thumbs up saying yes, and good for him taking a stance.

This small detail had somehow slipped through the cracks never really thought about, or overlooked.  Someone in Washington at last got a clue  realizing how hypocritical to have foreign made, American flags flown by our government and military entities.   Rep. Cheri Bustos of Illinois introduced The All American Flag Act last year which was passed in the House and still awaiting the Senate.  It is requiring of all government to fly only US made flags and reads as follows :  This bill prohibits agencies from using funds to procure a U.S. flag unless such flag has been manufactured in the United States from materials that have been U.S. grown, produced, or manufactured.    Grown, produced, or manufactured; three great words.

China after all…is a communist country that dismisses the same American values and freedoms all those people we honor fought for, like my Uncle who left to fight Japan for these freedoms at just 17.  I don’t understand why everyone doesn’t understand; or rather how we let something so simple yet so poignant slip unnoticed. 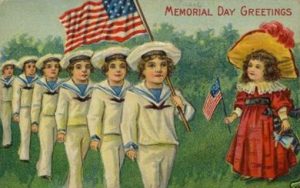 A few years back, South American rose growers started a Memorial Day flower program generously offering red roses for the headstones in Arlington Cemetery.   There was much fanfare and accolade to them for doing so and morphed into a US based, “non profit” of MemorialDayFlowers.org  using the( imported roses.(That now is generating profits).  They put great marketing emphasis on the rose variety Freedom as it is obviously an appropriate name, however this is not a red rose named for  US veterans, but yet a blanket cultivar grown in many colors under the Freedom rose name.

Again, I don’t understand how putting foreign grown roses on our US veterans grave sites free or not is an honor; especially since these same foreign, farms have nearly eradicated our own American flower growers as 95% of all flowers sold in the US are imported.  Which by the way….these US farms  have been the saving grace for flowers in my shop during our current pandemic as flowers became in very short supply since the imports were not coming in.  Oh well… everyone should be buying American grown like myself in the first place.

I know… it’s all about trade agreements, world economics, and price you say; and I know… these worldwide farms and factories create jobs for their own people they say.   If you ask any veteran what he is/was fighting for, the answer would be America and not the foreign flower growers or flag makers or any other foreign company or manufacturer.    I can’t ever imagine my uncle saying he was glad for Mitsubishi and… he never owned a Japanese vehicle his entire life and nor will I.

I feel to really honor them-take the time to find American grown and made items as I have.  They are out there, and may or may not be a dollar more; but that extra dollar will help our country not someone else’s, and that is truly being mindful of our veterans, the holiday, and our country.

My hope this Memorial Day is for you to go visit someone, spruce up the grave site, bring or plant some flowers, and whether they are veteran, patriot, or your sister- be a hero and bring those American grown flowers … with an American made flag.

Make Mothers Heart Sing-Help An Animal- Flowers For A Cause